Ever since we made an offer on this house, we knew we would want to add a deck someday, in place of this rickety little porch off the dining room. We came up with a preliminary design last year, and spent some time tweaking it this winter. We wanted to think about the final, final result, if someday, we were to enclose the new deck to make a screened in porch, then would we want to add another deck, for example. The first phase was finally settled on, and we get out building permit this last Friday. I was told I'd better hurry up and get the before shots because Greg was ready to start the demo process bright an early the next morning. 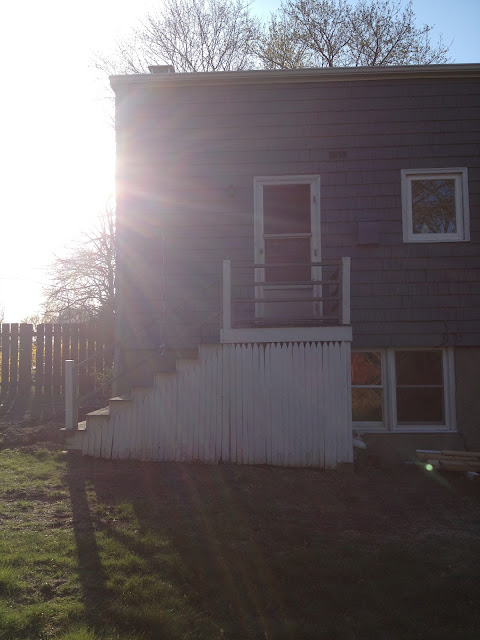 The new deck will hold the same edge to the right of the door as the old porch, because we do not want to obstruct the basement windows. This constraint limits the possibilities somewhat, but we're happy with our plan. We're going to come out from the house 12 feet, and past the corner of the house toward the patio by an addition 4 feet, for a grand total of a 12 x 14 deck. This should be plenty big enough to hold out table if we decide to bring it up from the patio, and the grill. I'm really excited to have the grill right off the dining room. I think it will be a lot easy to grill quick dinners early and later in the season. 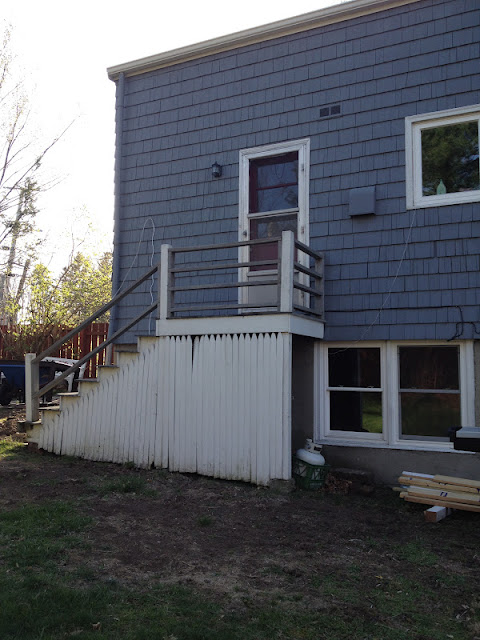 The old porch served as a bit of a storage area. But the new deck is going to be fully enclosed underneath! It will hold out bikes, the lawn mower, the snow blower except in the winter, out door furniture, garden supplies, etc. It won't be full standing height, probably closer to 5 feet of head room, but it will still take tremendous pressure off of the garage. We're really looking forward to this feature. 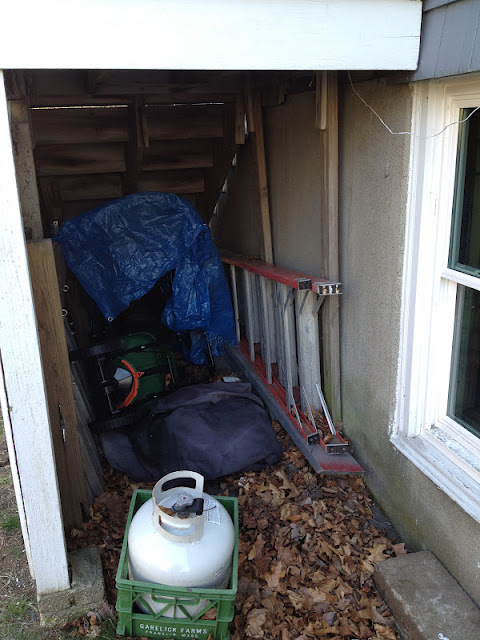 Greg, the structural engineer, was not at all satisfied with the foundation under these stairs. We did go up them one last time, after which he admitted we shouldn't have! 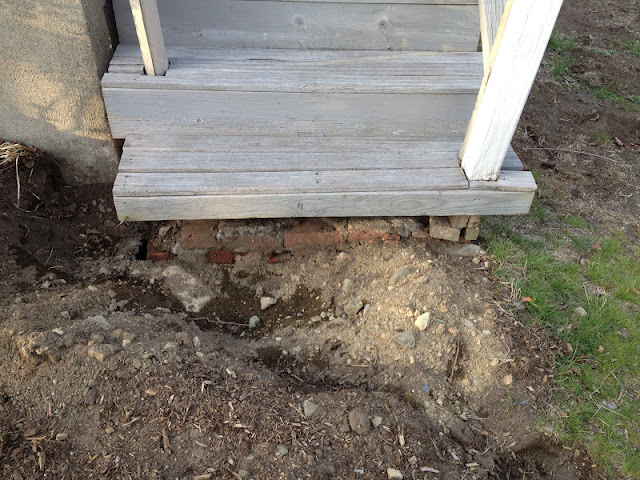 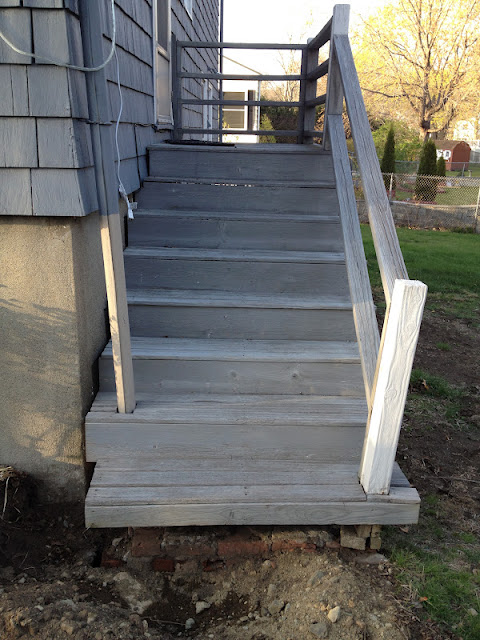 Sure enough, the next morning when I came downstairs at 8:30, this is what I saw. Greg put in a temporary support, unfastened 4 bolts, and was ready to pull down the whole structure. 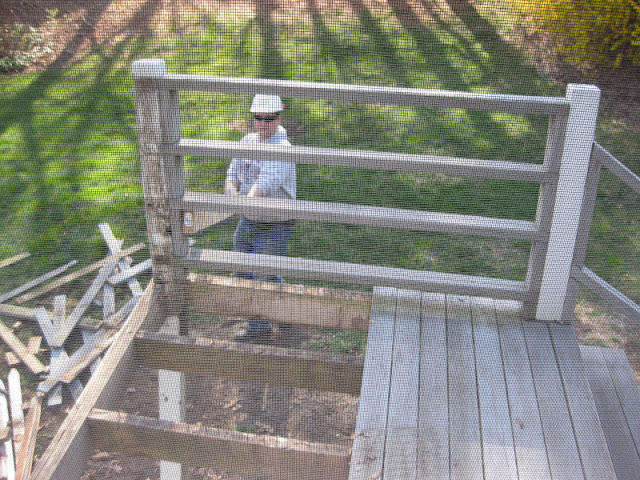 He grabbed ahold of the temporary support, and gave one swift pull. The whole entire stair tipped over as one unit. It was quite dramatic! I think he was a little bit in shock that it was so easy. 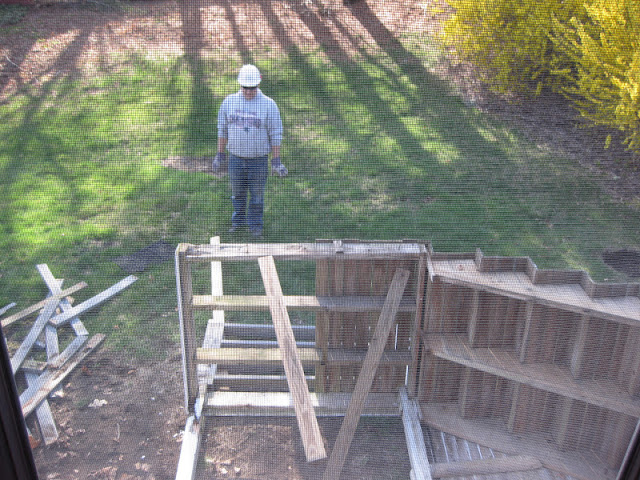 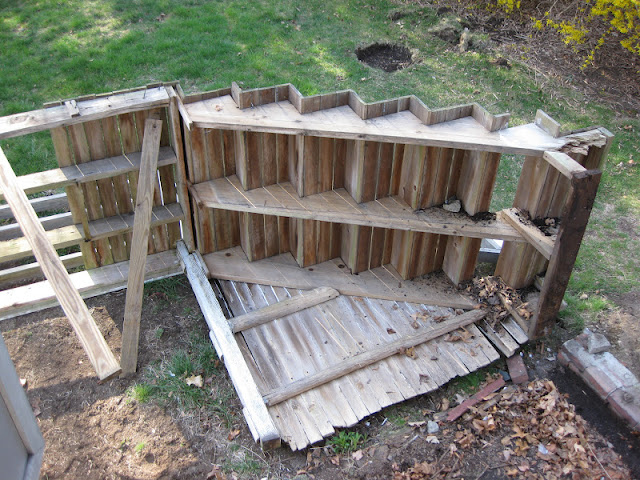 The next day, Greg spent the entire day prepping for construction. First, he had to establish access to the back yard for the equipment that is needed to dig the 18" diameter 4' deep holes for the foundations. We were considering temporarily removing two sections of the red wooded fence on the patio side of the yard. That would have also required removed 3-4 of the forsythias (which I would completely be ok with). But, when we gave it another thought, we realized that it would be better to have more permanent back yard access on the other side of the house where the chain link fence is. We'd like to replace it eventually with a double gate that would be wide enough to drive the truck through. 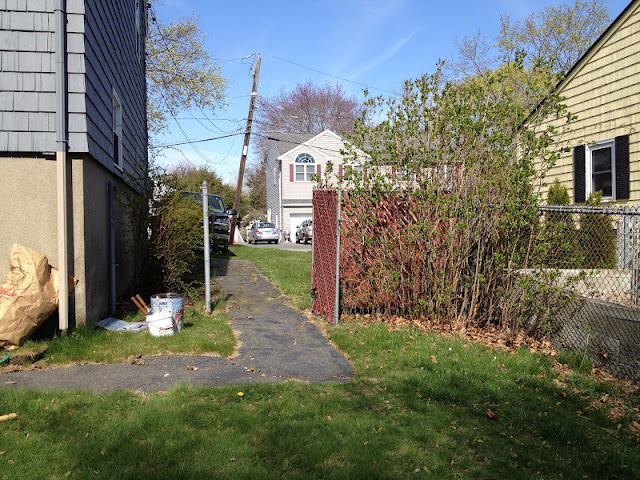 Greg dismantled everything carefully in case we do want to put this fence back up in the interim. It is nice to have a (mostly) fenced in yard, even though I think this particular fence is incredibly ugly! 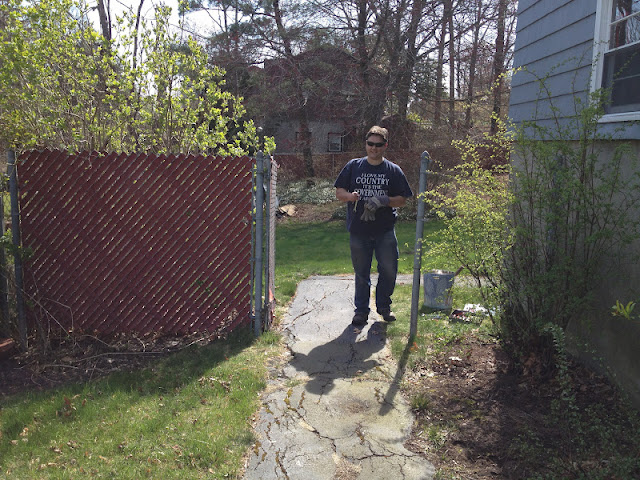 As usual, Greg made short work of the demo, and even dug up two of the over grown, ugly bushes along the side of the house. We'll replace those with something nicer and more manageable someday too. (There is a lot of someday here, but I have faith!) 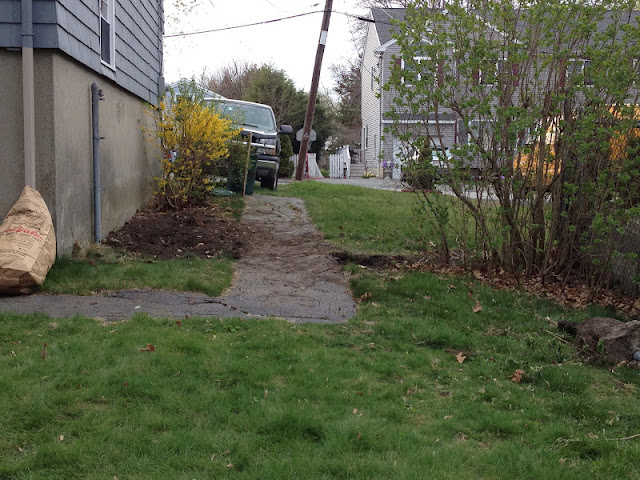 The next task he took on was to clear the grass from the slab and foundation area. 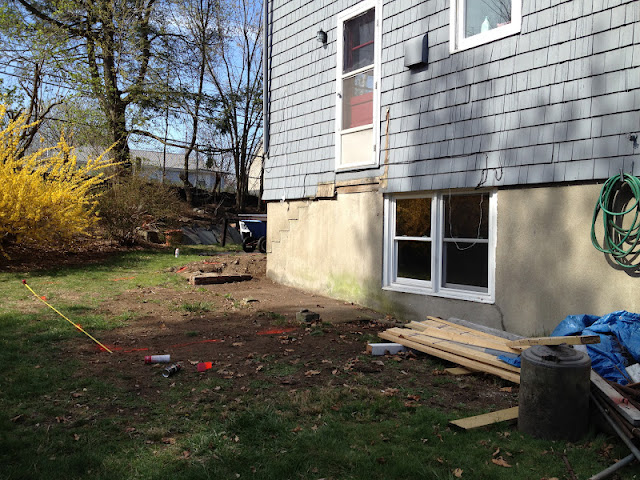 There is a bituminous slab that was under the old stair. We decided it would be easiest to leave this in place, and pour the new concrete slab around it. It's clearly sloped, so I'm not sure yet how Greg plans to handle this detail. 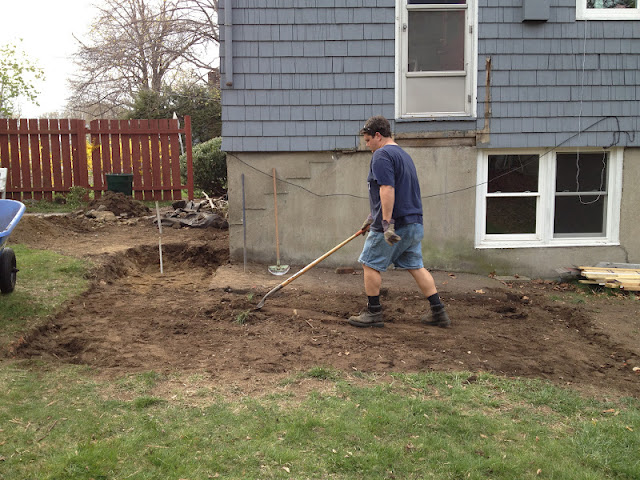 Since we decided not to take down the wood fence, Greg is using the patio to stash all the extra dirt and rocks. 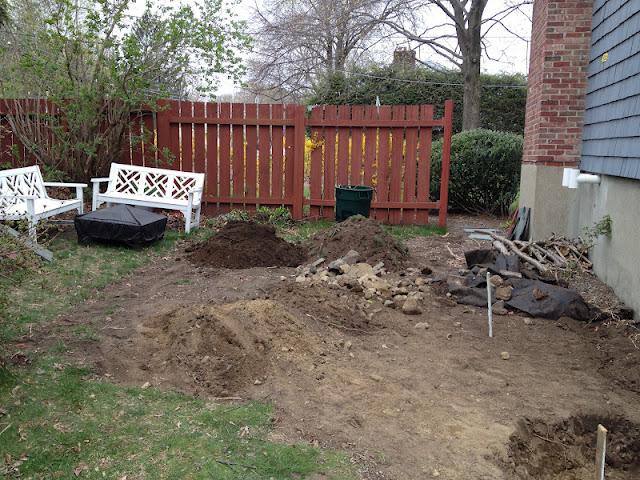 But, he had already cleared most of the patio stones in anticipation of equipment driving over them. This will give us an opportunity to set these stones in a more level condition, with landscape fabric and sand and whatever else should be in them. It will be nice to eliminate some of the tripping hazard. 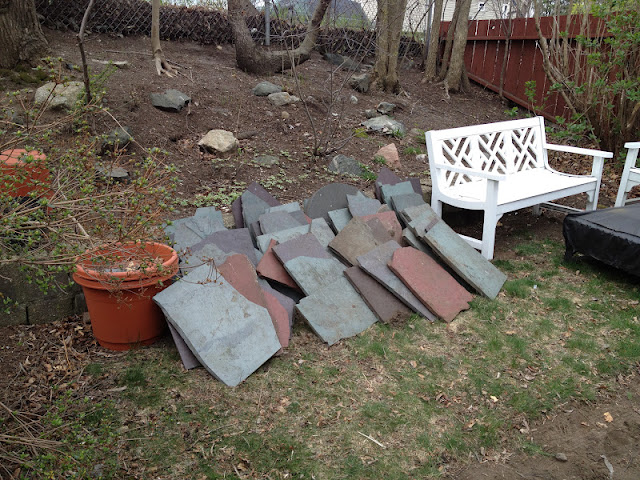 We'll be getting a dumpster in a few weeks to take away all the construction debris. In the meantime, Greg has started a waste pile in the back of the yard. 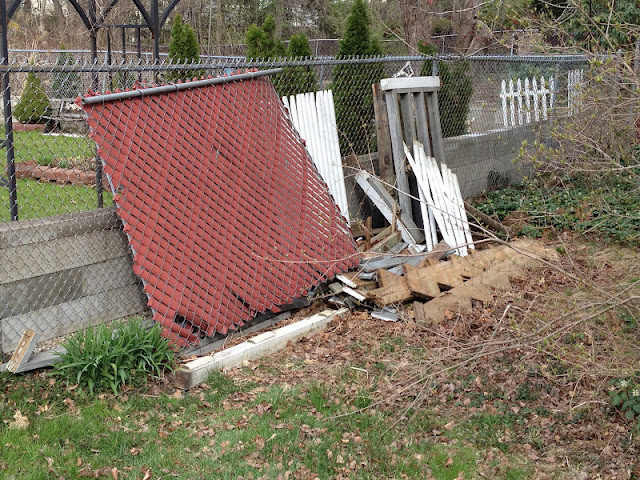 Yes folks, that was all in one weekend's work for my rock star husband!