It's time to do the nursery

In case you haven't heard yet, Greg and I expecting a baby boy this October! We beyond thrilled! And of course, this opens up a whole new realm of home improvement projects. So, yes, I will admit, while Greg has been busy building the deck all spring, I have been doing a lot of napping in the hammock, but I have also been doing a lot of prep work on our son's nursery. I thought I'd share a little preview of what we're planning so far. Oh, and in the images below, you'll see we've given him the nickname "Luigi" so we can call him something more interesting than "the baby" before he gets here and we decide on an official name. (and no, we won't be sharing our list until he's actually here!)

First, here's a mood board of sorts showing the feature wall. The other three walls will be the light aqua color, which is pulled from the bedding. The bedding is Blue the Morning  Zoo from the Land of Nod. The crib is the Hudson from Babyletto, and the curtains are blackout curtains that match the green in the bedding, from many sources online. The rocking chair is an antique Victorian chair I got from my grandparents house, which my mom has been kind enough to store for me for the last decade. We plan to paint it white and reupholster it, which should be interesting, since we're essentially rebuilding it from scratch. It was literally filled with hay and horsehair! There are two windows in the room. One opposite the feature wall, and one to the left of it. The crib will nestle in between the windows. The last wall, to the right of the door is mostly just the white closet doors. 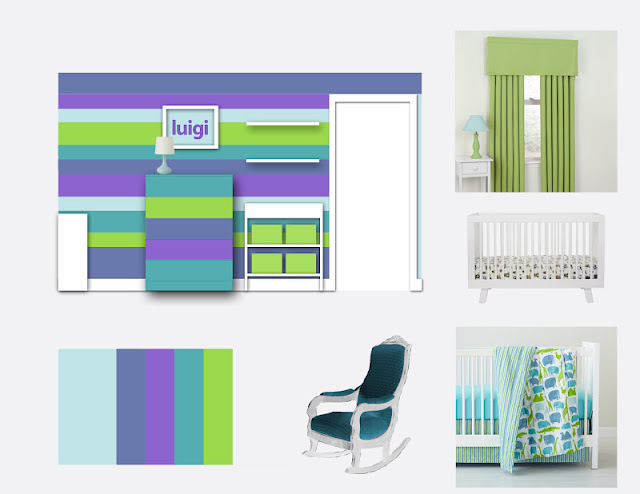 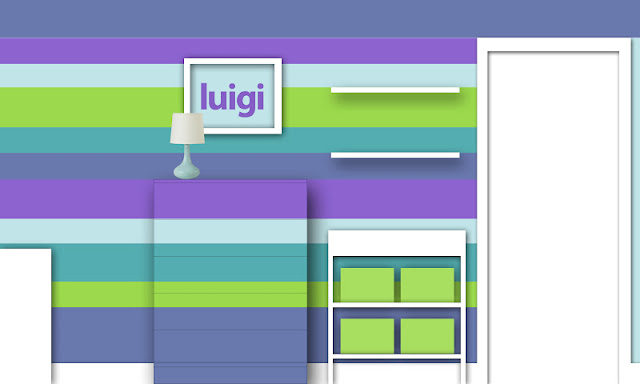 The tall chest of drawers is my old piece. It's a sturdy natural maple chest that I've had since I was a teen. We just got a new dresser for our bedroom that finally coordinates with the rest of our furniture...which hopefully I will get around to showing you someday. So yes, I have no problem painting natural wood. My first thought was to paint it to match the stripes on the wall, and almost camouflage it in. 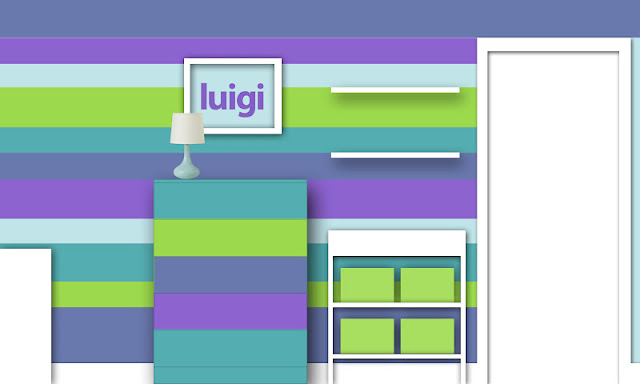 But, then I wasn't sure if it stood out enough. So, I looked at painting each individual drawer it's own color, and something that would intentionally be different than the wall stripe behind it. I think this makes it pop a bit more. 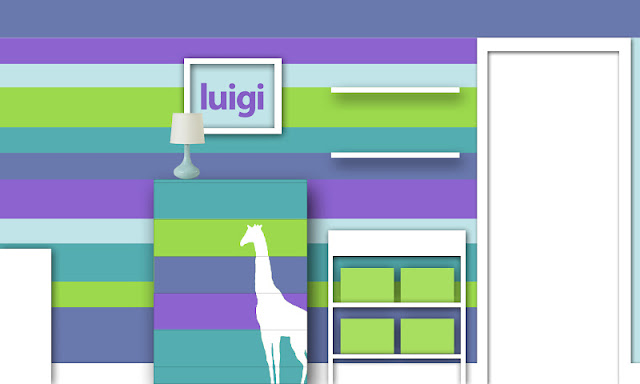 Lastly, I love the idea of some large scale animal silhouettes that Luigi can relate too, so maybe one would work on the drawers? Especially since we're just not going to end up with a heck of a lot of bare walls at his height. At first I thought I would paint it on. But then I reminded myself about the decals, which will make it much easier to get rid of when we're mature enough to move on from zoo animals.

The room has hardwood floors, so we want to put down some type of area rug. I am absolutely in love with carpet tiles. They have been awesome with our cats when there is a mess. We just pick it up, spray it off in the sink, let it dry, put it back. This seems like it would be a great feature in a kids room too. Not to mention that they are so easy to move around, change up the pattern, or take with you when you leave. It's pretty much a definite that we will use them here. I just have to come up with a design. I'm thinking of creating stripes on the floor with the carpet, that will run parallel to the ones on the wall, almost making it look like the wall stripes folded down onto the floor and across the room. What do you think? Too many stripes? I tend to use a lot of patterns, and mix and match. I always think it might be too much, but it hasn't yet...Maybe a checker board of just two colors, or a solid field with a contrasting boarder?

Let me know what you think. Which dresser do you like best? Thoughts on carpet patterns? Ideas where I can find a fun and colorful graphic zoo animal mobile?

And never fear, I still have tons of pictures to share of how the deck is coming along. It's all finished up top now. We just hosted two parties this week with 15 & 16 people, and everyone fit! Greg is still hard at work on the next phase...the shed enclosure.