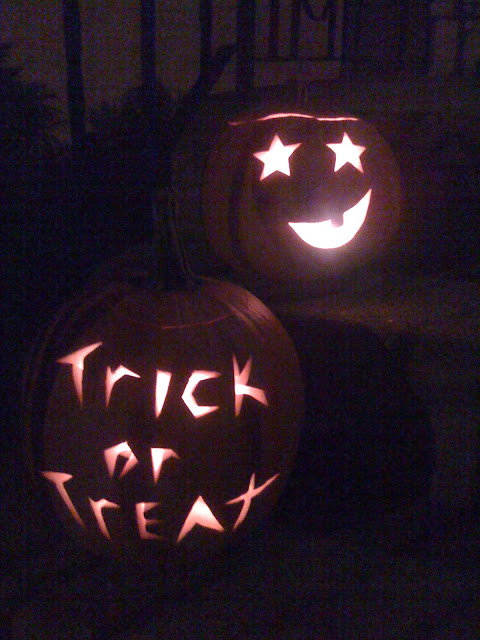 I had fun carving pumpkins today for our first Halloween on Kingston Road. I will admit, I was a little disappointed in the turn out though. We only got about 5 kids. I think our neighborhood is still occupied by a lot of original owners...so I suppose there are not too many kids around. Oh well, I still think my pumpkins looked good. 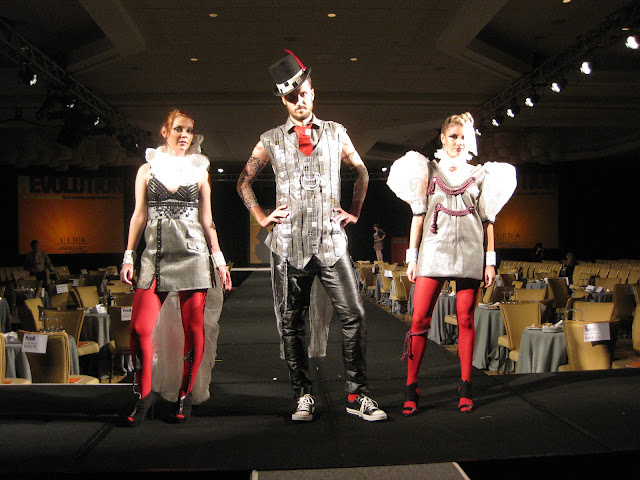 The Thursday after my Mom’s visit was the annual IIDA fashion show which I participate in every year. I went right from an unpacking/organizing marathon, into a sewing marathon, complete with sewing one of the models into her dress right before the show. This is one of the reasons why I have been slow at posting the progress we’ve been making (and a reason I am slow at making progress!) around the house. But, it’s one of my favorite events of the year. I can’t keep myself away. 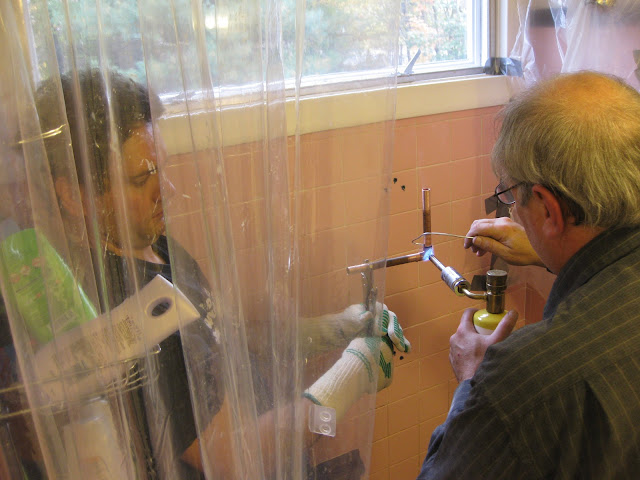 Our extremely productive weekend continued on Sunday with a little help from Uncle George. George and Greg managed to install shut-off valves in the laundry room. This means that for future plumbing projects upstairs, we will still have use of the toilet in the laundry room. A key luxury. 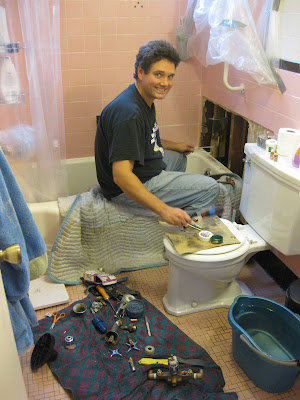 After the shut-off was installed, they moved on to the shower project, installing a brand new temptrol control, and saving us hundreds of dollars by doing it themselves. I am enjoying the new control very much. Next, we have to learn how to retile the wall!
No comments: 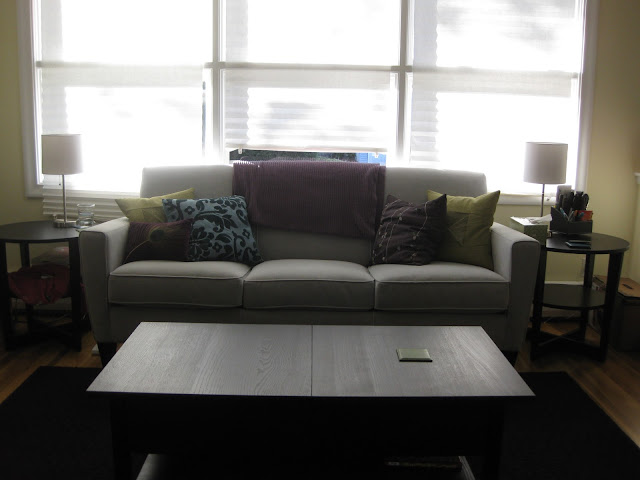 My mom came to town for the weekend to help jump start the settling in process, which has been slow starting after completing my exam...mostly due to my annual fall adventure into the fashion show. But, with my mom on the task, we were able to make a TON of progress around the house. The main floor, while not decorated yet, now feels like a place people live, instead of a place where people stash boxes of stuff! Don’t get me wrong, there is still a lot of work to be done, but now we feel like we’re enjoying the house while we work on other rooms. 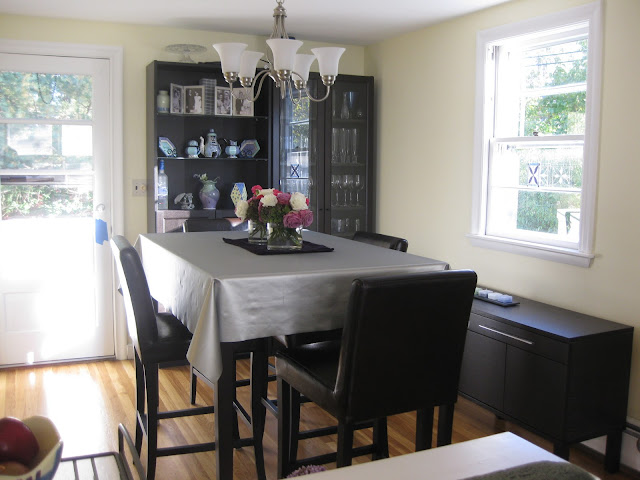 Here’s a peak at what these spaces actually looked like while the task master was working her magic... 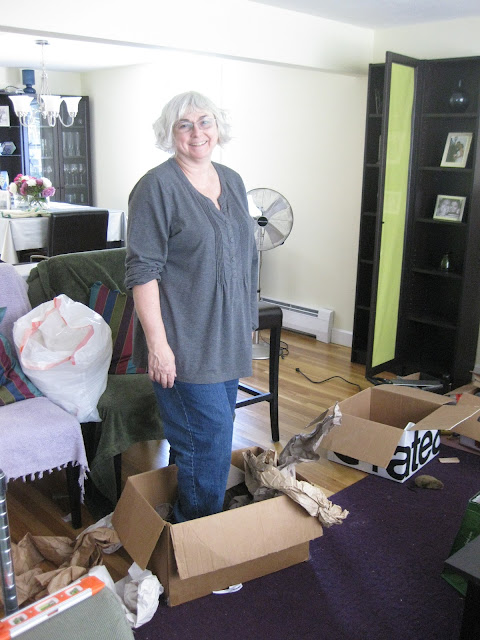 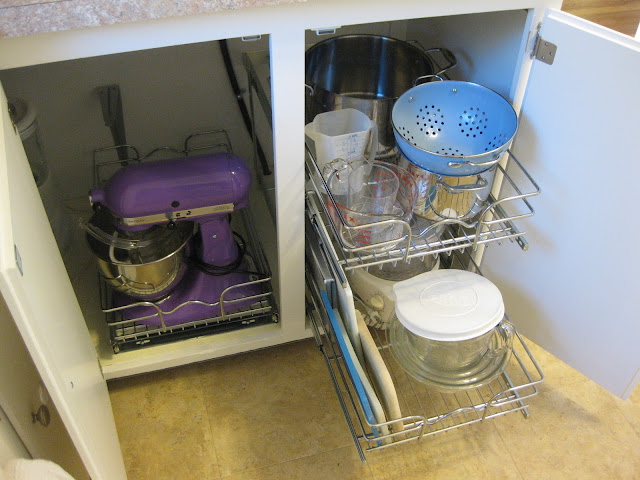 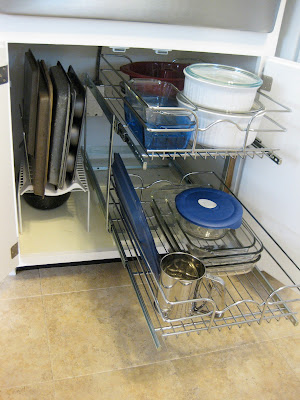 Kitchen design has come a long way since cabinets were built in place in 1959. The storage in our kitchen was extremely inefficient. Another one of those long term dreams we have would be to completely redo the kitchen. But again, that’s a few years off at least. So, we needed to take some action in the interim to fit more into those pesky cabinets. Part one of the solution, add pull out drawers. Greg installed most of them (4 total, and we think we may add two more) on Friday night in preparation for Saturday’s organization marathon with my mom.

Part two of the solution is to add a cabinet and countertop on the half wall between the kitchen and dining room. The cabinet, from IK*A is in place already. It has three drawers. Pictures will come at some point, probably once the counter is installed. 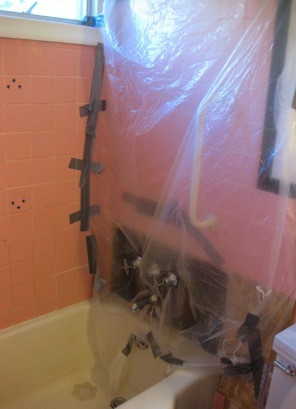 Who would have thought that Greg and I might learn how to tile so we could put of MORE of this lovely pepto bismol pink tile. But that looks to be exactly what we are planning to do. It’s going to be a long while before we’re ready to take on redoing this entire bathroom (like well after that master bathroom I’m dreaming of). And do to what looked to be a minor plumbing repair, Greg ended up opening up a fairly significant hole in the wall.
So, what was the plumbing repair? The bathtub faucet had been dripping quite a bit. It wasn’t really bothering us at first, until a pink slime started to appear in the tub. We discovered that this pink slime is a bacteria that often shows up in bathrooms, and other damp areas, especially after a recent renovation...hmmm, like having all the wood floors sanded, maybe?
Last weekend I decided to tackle the slime with a scrub brush and bleach. We put a bucket under the drip to catch the water, and allow the tub to dry out. The bucket filled up completely after only a few hours, and we realized just how much water was actually being wasted. Greg decided to take action. As soon as one of the covers around the fauccet was loose, it became clear that many of the tiles were loose because the wall behind them was very wet. They were basically being held in place by tension. At least we got them off without breaking any, so we will be able to put them back up.
Greg managed to add a washer to the hot water valve which stopped the immediate leaking. A new part arrived during the week, which he installed last night. So, now, there is no more leaking. We just have to deal with the big gapping hole in the wall! We’re now debating updating the shower control all together to a modern temptrol instead of separate hot and cold valves. This story is definitely to be continued...

VP
It looks like the time to upgrade to a modern temptrol. Think of all the remodel stuff we are learning! OXOXXOXOXOXO
Saturday, October 16, 2010 - 04:29 PM

CHRISTINE
That is definitely not something I would have ever expected you to say! Maybe pink tile will be in next year though, who knows?! ;-)
Monday, October 18, 2010 - 09:55 AM 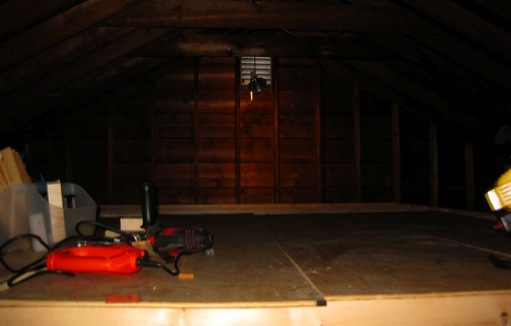 The insulation team is scheduled for mid-November. Greg is making great progress on prepping the attic. Last weekend, with the help of his brother Jeff, the framing for the platform was largely put in place. Click here for the before shot. In addition to the attic space, the eaves off our bedroom will be insulated. Greg has been pulling out all the existing whimpy layers of insulation, and in addition, ripped down the partition that used to divide the eaves into two separate spaces. You can see, we are already making good use of this space. Although, I hope some day (many years from now!) it will be a master bath and a walk-in closet. 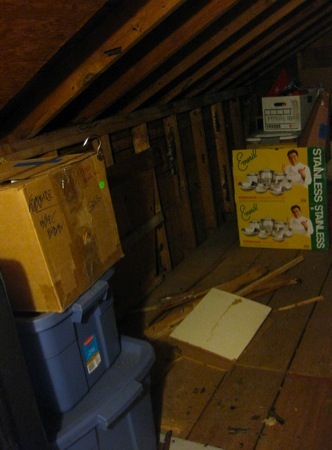 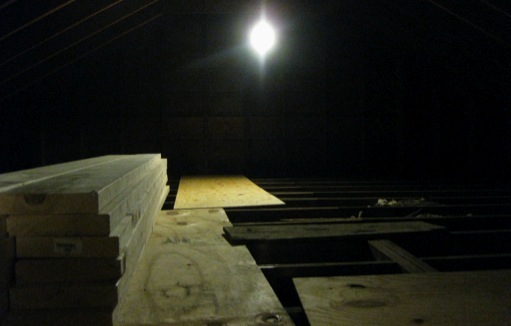 I’m back from my torturous study hiatus! And now it’s time to get down to some unpacking and home improvement business. One of the big projects Greg has in the works is preparing the attic for fresh, new insulation. Above is a shot of our attic space above the two bedrooms which can be access though what will be Greg’s closet in our bedroom. The insulation that will be blown in will be 12” thick, so before it can go in, Greg is adding the framing for a plywood subfloor so we will be able to use this vast expanse as storage. I’m hoping this will take the storage pressure off of the basement, so we will really be able to use it as a family room. Pictured below are the remnants of the broken attic fan and enormous television antennae that used to live in the attic 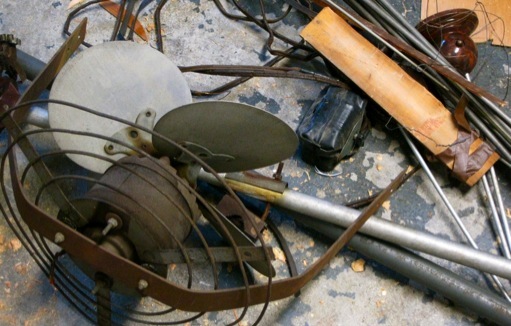 VP
I can't think of an appropriate comment. I was expecting to see something freshly vacuumed.
Monday, October 4, 2010 - 10:57 PM

LORI G
Kudos for entering The Attic. Can't say I've ever been up in mine. Supposedly lots of storage space up there, but creeps me out a bit.  Silly question but even with insulation (which does more for the living space below than the attic itself, right?), do you have to be careful what you store up there due to temp extremes? I.e. no candles...