This weekend, we painted the office. As Greg's friend Eric asked while they chatted on the phone..."Purple, or green?" Well, I guess it's good to be known for something. 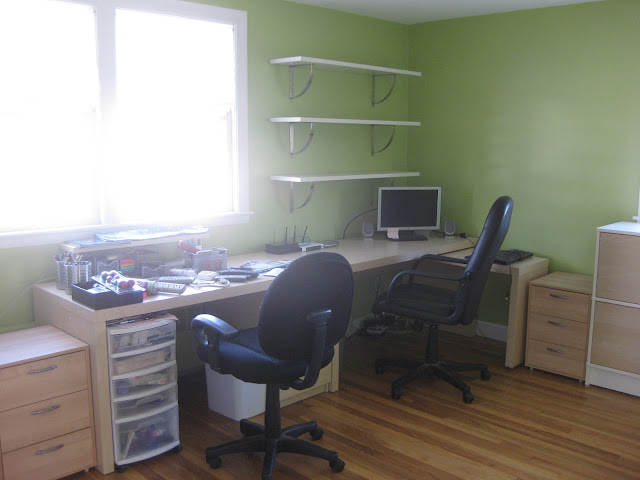 Here's a before shot in case you forgot what that awful yellow was like. 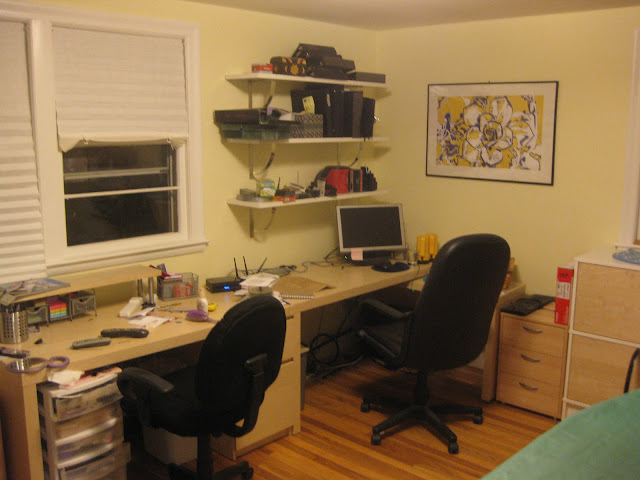 It became even more awful after we bought our new office furniture last October. We decided to go with a mix of white and light wood (birch according to Ikea.) Isn't it amazing how much better both the white and the wood pop off the green? 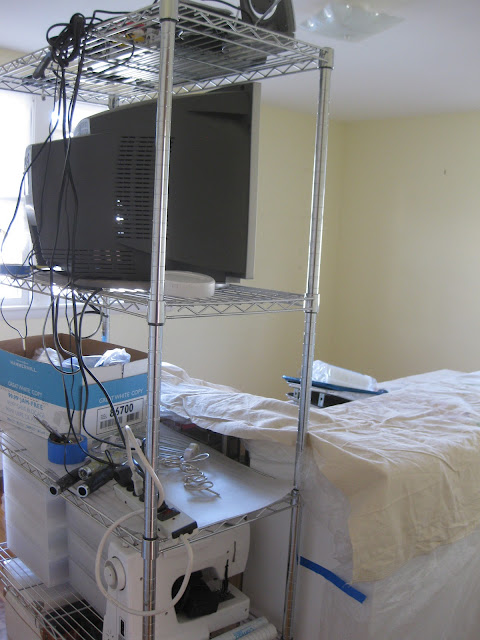 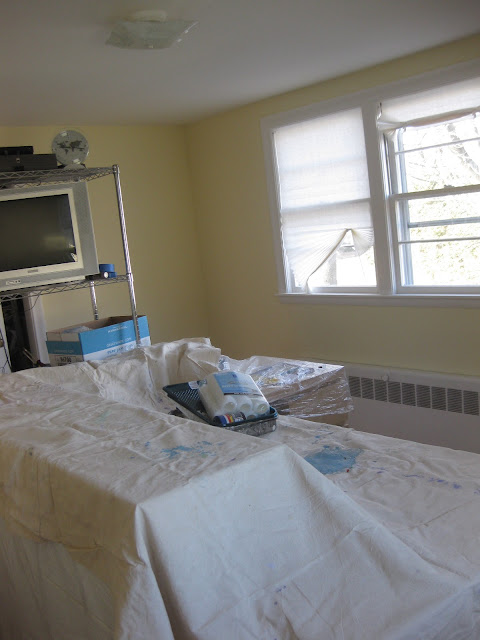 Of course, before a room looks finished, there must be chaos. We moved a lot into the other bedroom, but pushed the desks and TV shelf into the center. It's always handy to have a raised work surface for painting projects as well. 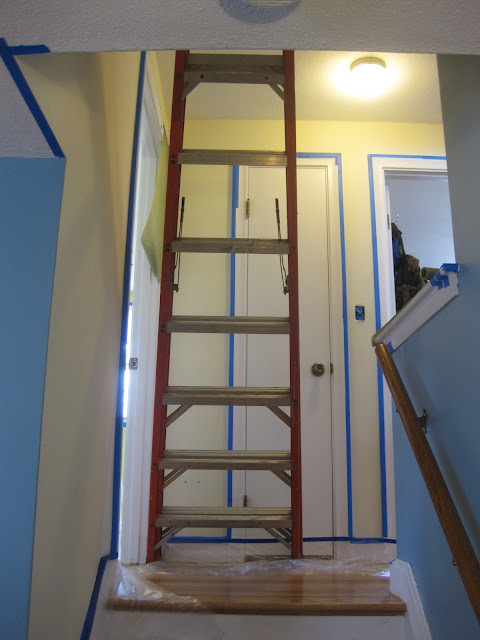 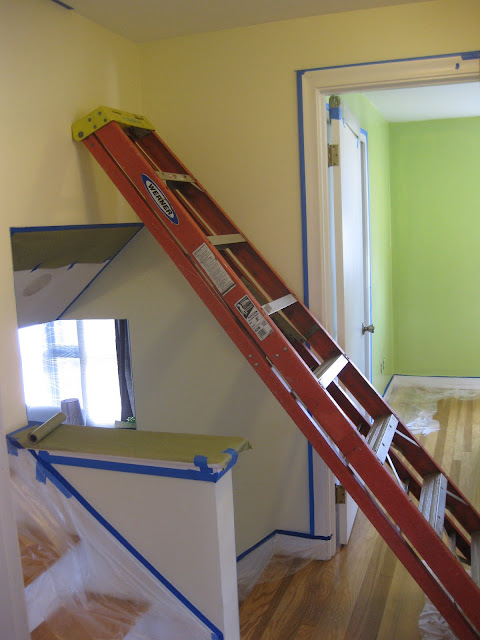 While we were mobilized for painting, we thought it was a good time to finish off the hallway. When we painted the living room  a year ago, we weren't sure if we wanted to carry the teal blue all the way up the stairs. It didn't take us long to realize that it was the right decision, but we had so many other projects in front of us, it took until now to get back to it.

Greg had to use our tallest ladder to reach that very farthest corner above the stairs down. Yes, he did climb up and balance himself right over the stairs. I wish I had gotten a picture of that. At least, the way the ladder was wedged in, it was highly unlikely that it would go anywhere.


And now, a few more after shots, and a little more about the furniture we bought. 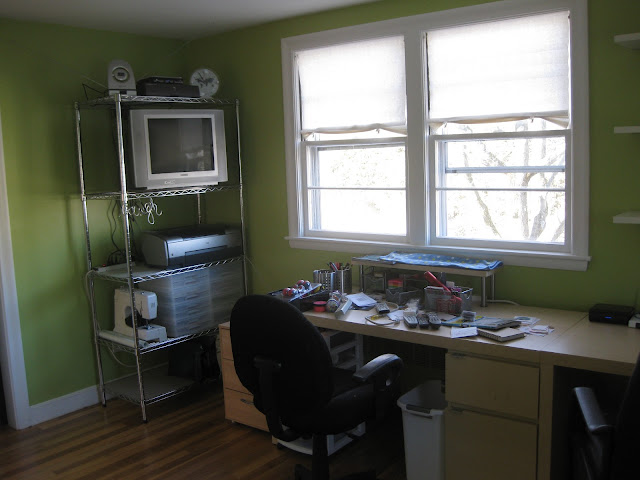 Here you can see one of the two desks we bought. Love back above for the rest of the second. They are basically two variations of the same style. The one above has a cabinet and a drawer. We added a little shelf under the window, mostly so I could stash some stuff on the top of the desk and Ziggy would still have a place to sit by the window. We got two sets of drawers on wheels that we can move around,  stash under the desk, etc. 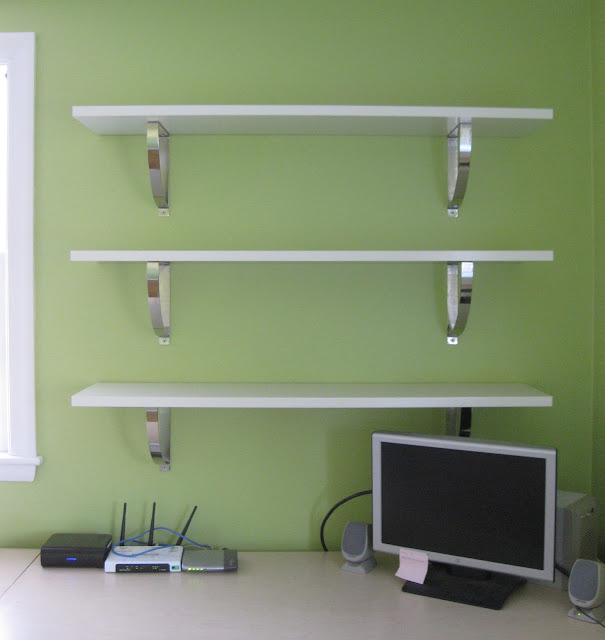 I'm so in love with how the white shelves look against the green. Now, I just have to find a way to disguise the largely unattractive stuff that Greg likes o put up there! I also have a plan for hiding our router, modem and back-up drive. I just need to get to it! 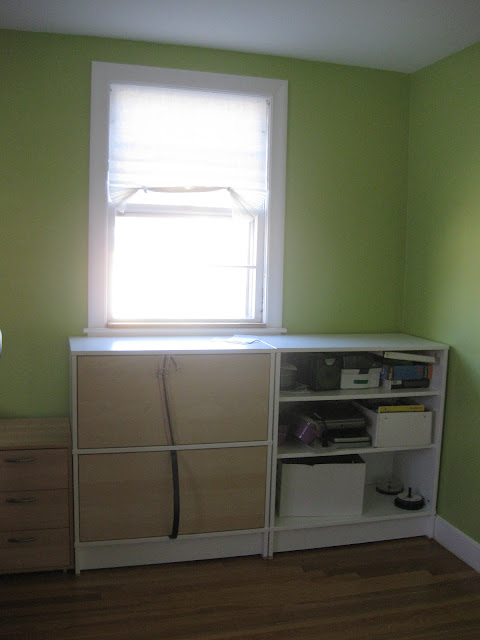 The last pieces we got were a filing cabinet and an open shelf to go next it. The filing cabinet still needs drawer pulls. Right now we're using two of my belts to get the drawers open. We still have some more storage to buy for the wall opposite the big window. We might be getting that this weekend! Maybe sometime after that, I will actually get the room all cleaned up and get some nice photos. We shall see. But I think it's all coming together little by little.

Now, I think I will leave you hanging a few more days to see how the hallway turned out!