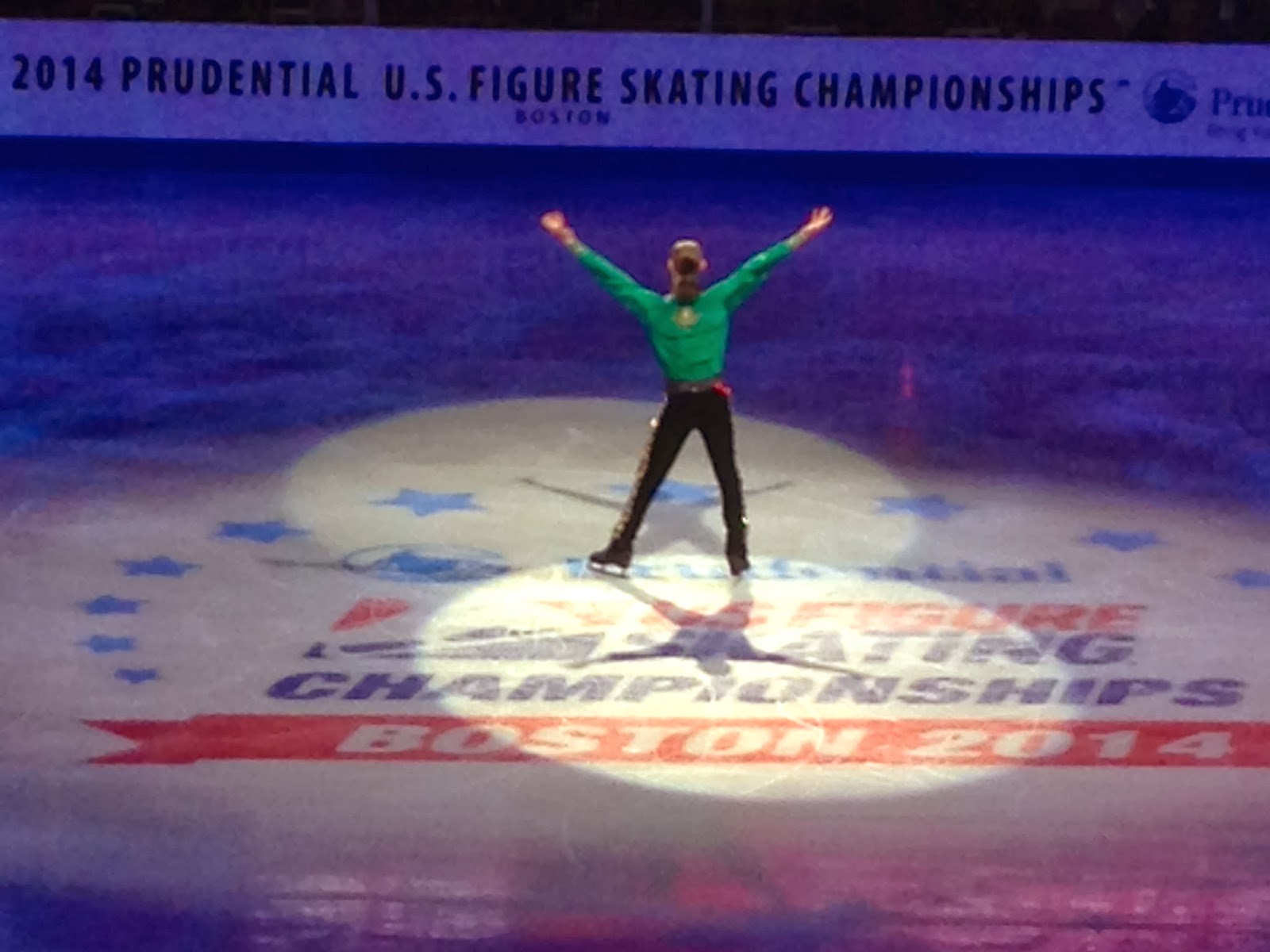 It's not my intention that every single post I write from now on will be able something that literally sparkles, but it just so happens that a few weeks ago, I had the privilege of attending the Men's Free Skate at the 2014 US National Figure Skating Championship which was held in Boston this year. It doesn't get much more sparkly than a figure skating event.

The tickets were a Christmas gift from my awesome husband, and what a perfect gift it was. Anyone who has known me for any length of time understands that I have just a small obsession with the sport of figure skating. And, with the Olympics getting started, this was the competition that decided who the US would be sending to compete. I have to say, I was quite satisfied with the outcome of the competition. I'm very much looking forward to watching Jeremy Abbot and Jason Brown competing over the next few days, along with the rest of the skaters. 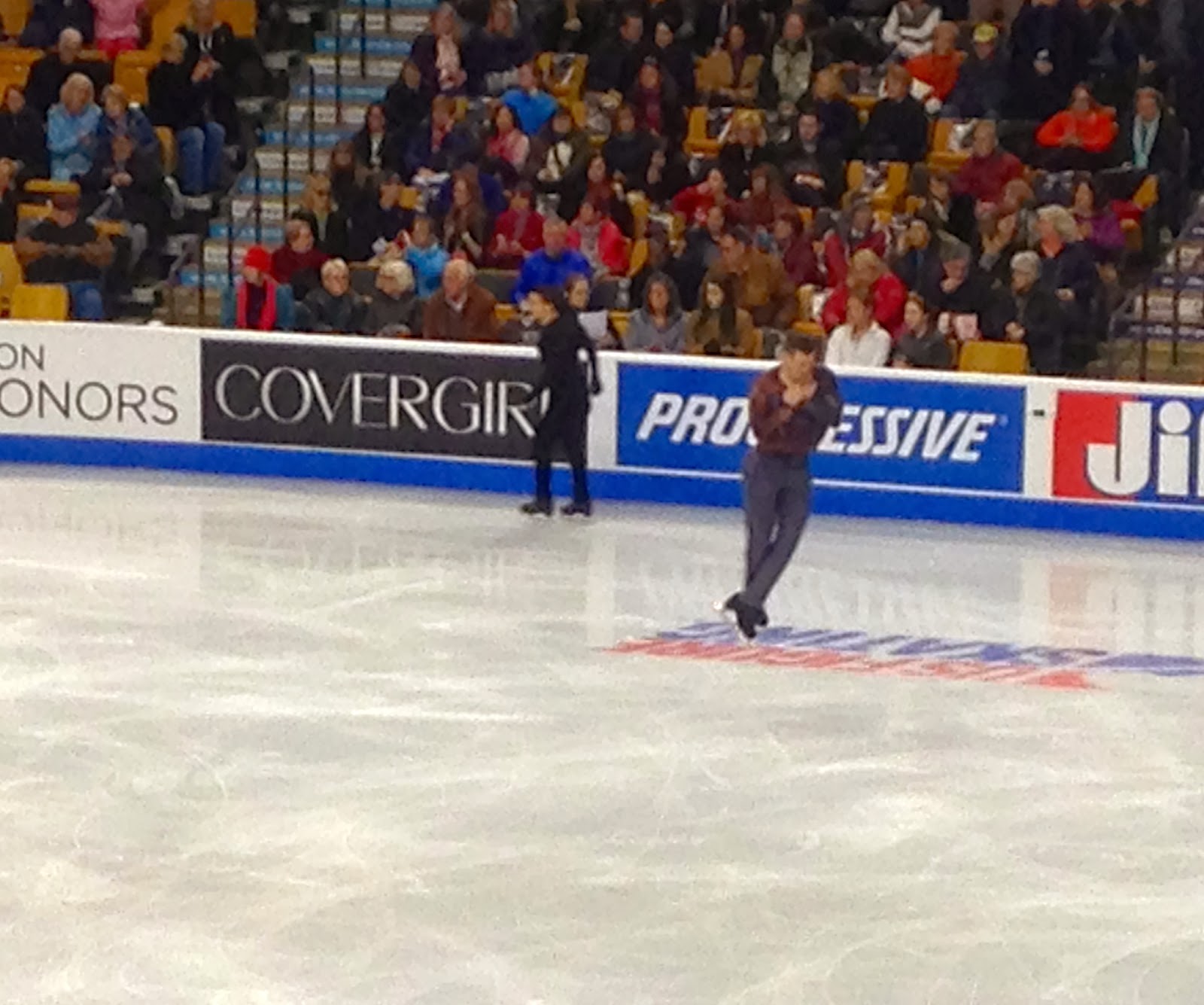 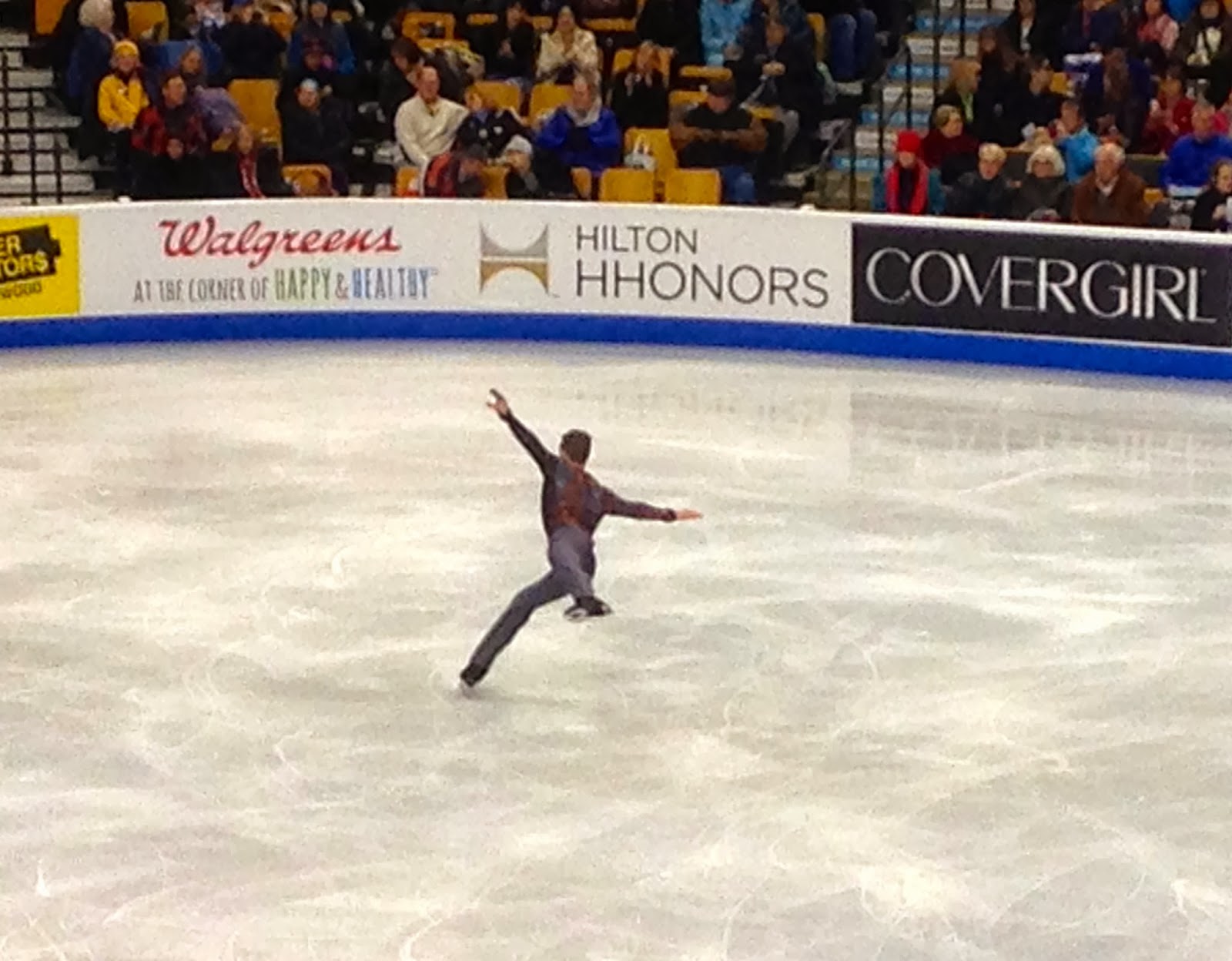 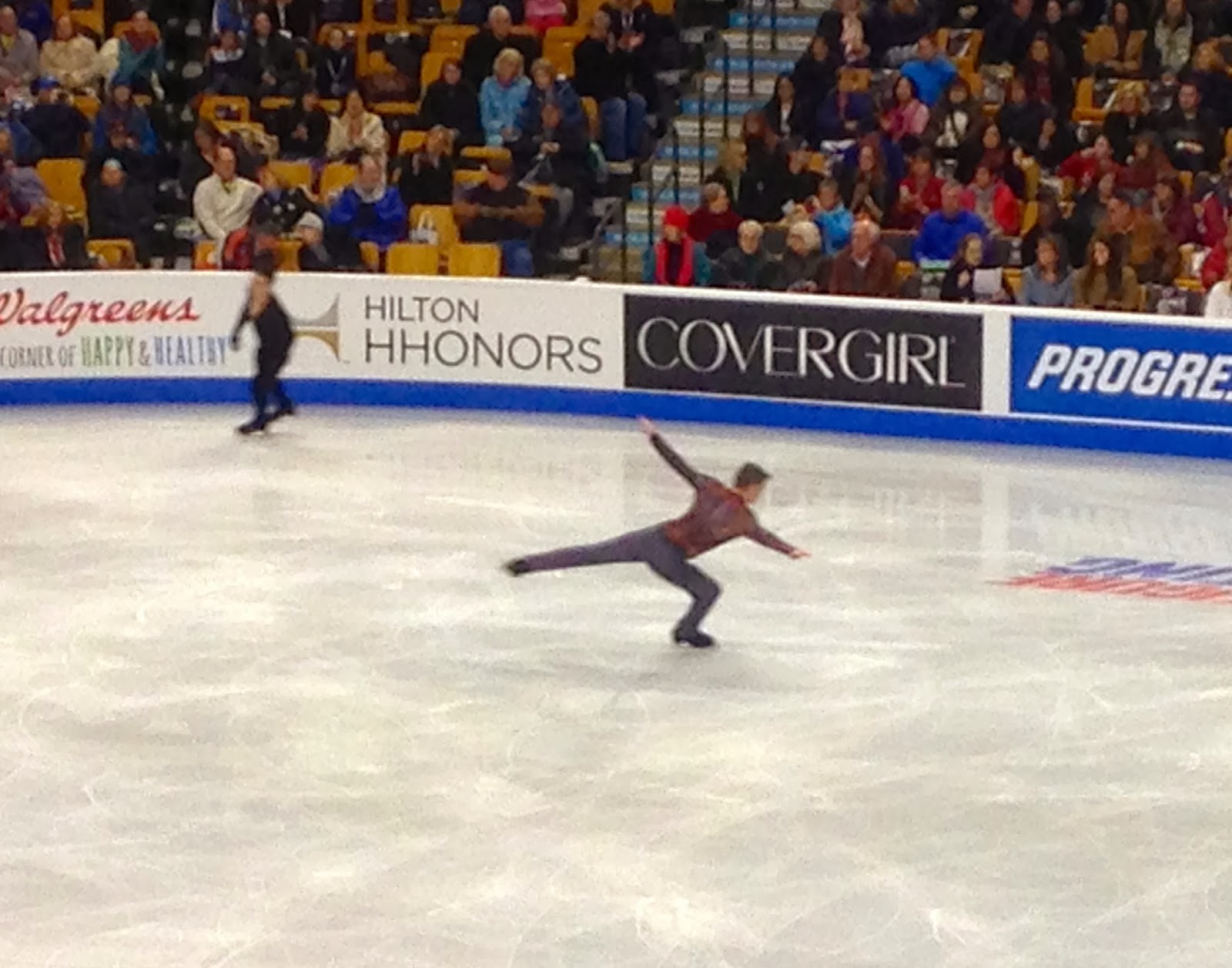 Just as exciting as watching the competition, was the people watching. Our seats were in the first row of the club level, at center ice, so we were one section up behind the judges. Apparently, the section immediately behind the judges is where they VIPs are seated. When we first arrived at the event, we were looking for a place to eat, and wandered by the press area. We walked right past Paul Wylie. But I nearly started to hyperventilate when he literally walked up and sate directly in front of us. I'm talking, I could have reached over the railing and patted him on the head. Oh, how I wanted to! I did get up the courage to ask for his autograph before we left at the end of the competition.

After Paul sat down, I heard some women near by talking about Kristi Yamaguchi eating popcorn just like the rest of us. I started scanning the crowd. Wouldn't you know, four rows in front of Paul, was his 1992 Olympic teammate. I actually caught her in profile and recognized her eyelashes. (Obsessed, I told you). 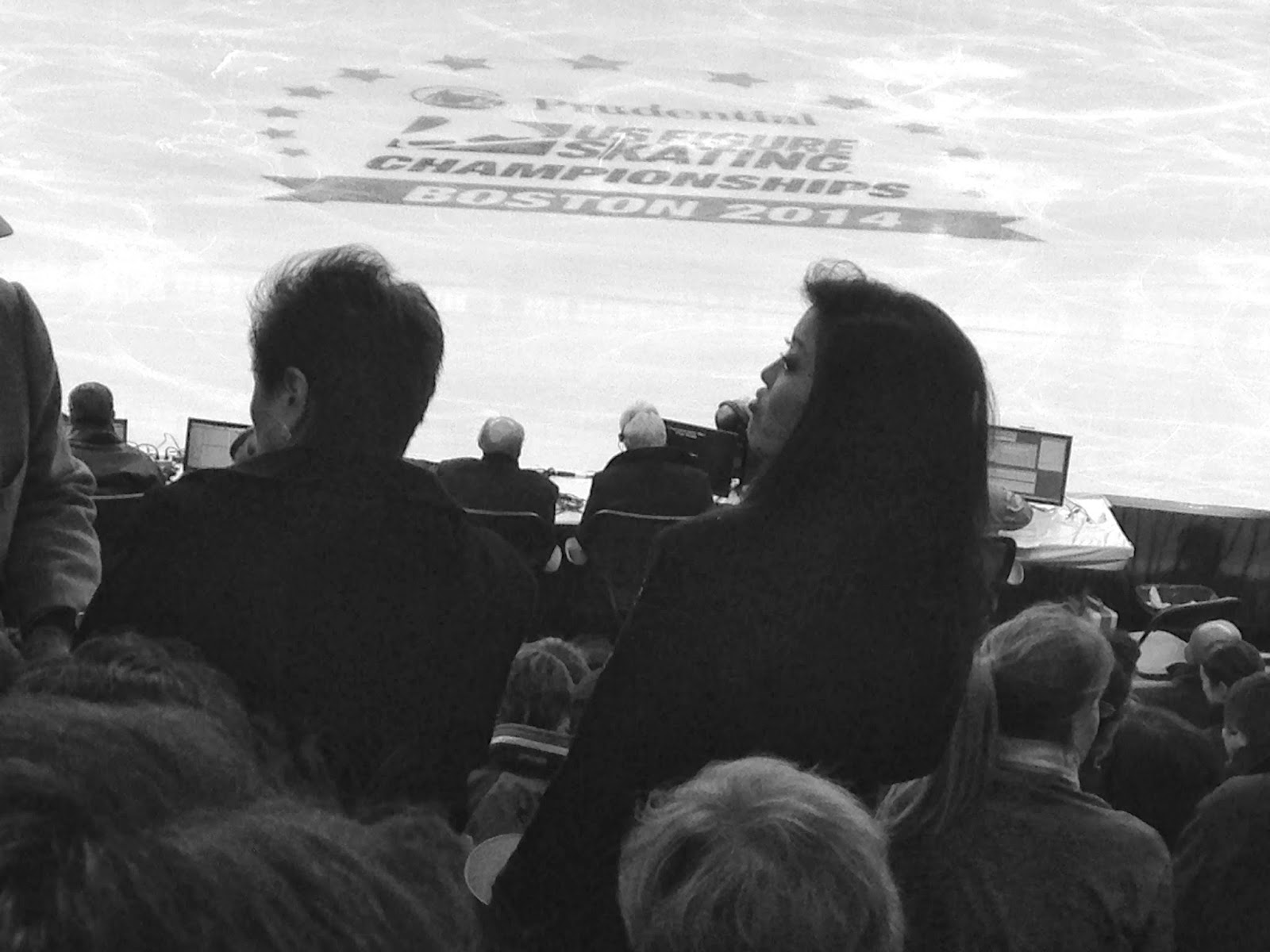 A few minutes later, an elderly gentleman entered Kristi's row. It was Dick Button. Most people who watched in the last two decades know him as a commentator. He was also an Olympic gold medalist back in his day. Kristi stood up to let him by.

He sat down right between Kristi and...Dorothy Hamil! And then I saw her turn around to talk to a man behind her. Brian Boitano!

I also saw a woman with a fur coat and perfect blond chignon. I had to do a little googling on my phone to figure out that it was Carol Heiss, another skater turned coach. And of course, where there is a televised skating event, there is Scott Hamilton, though he was a bit further away. 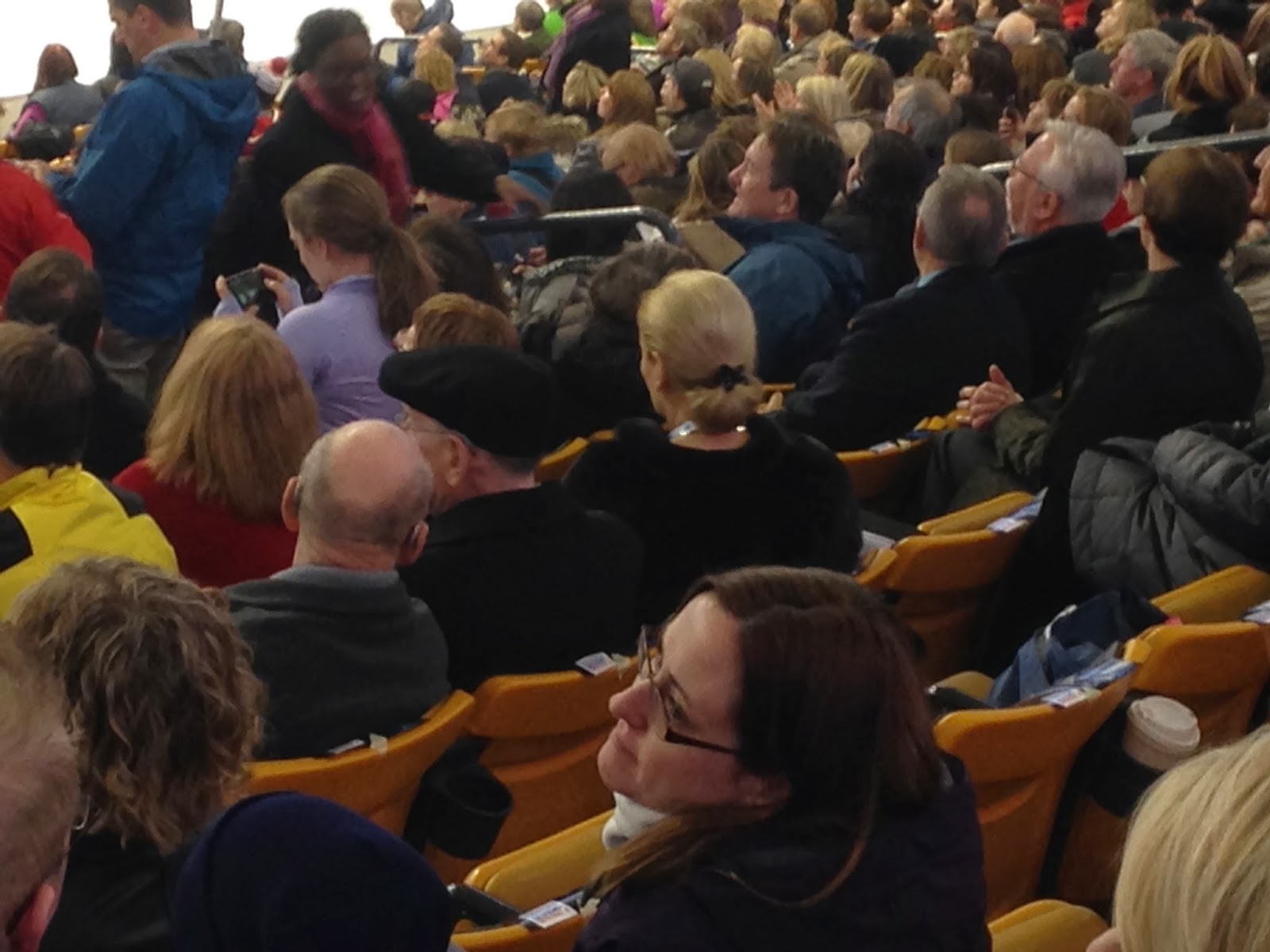 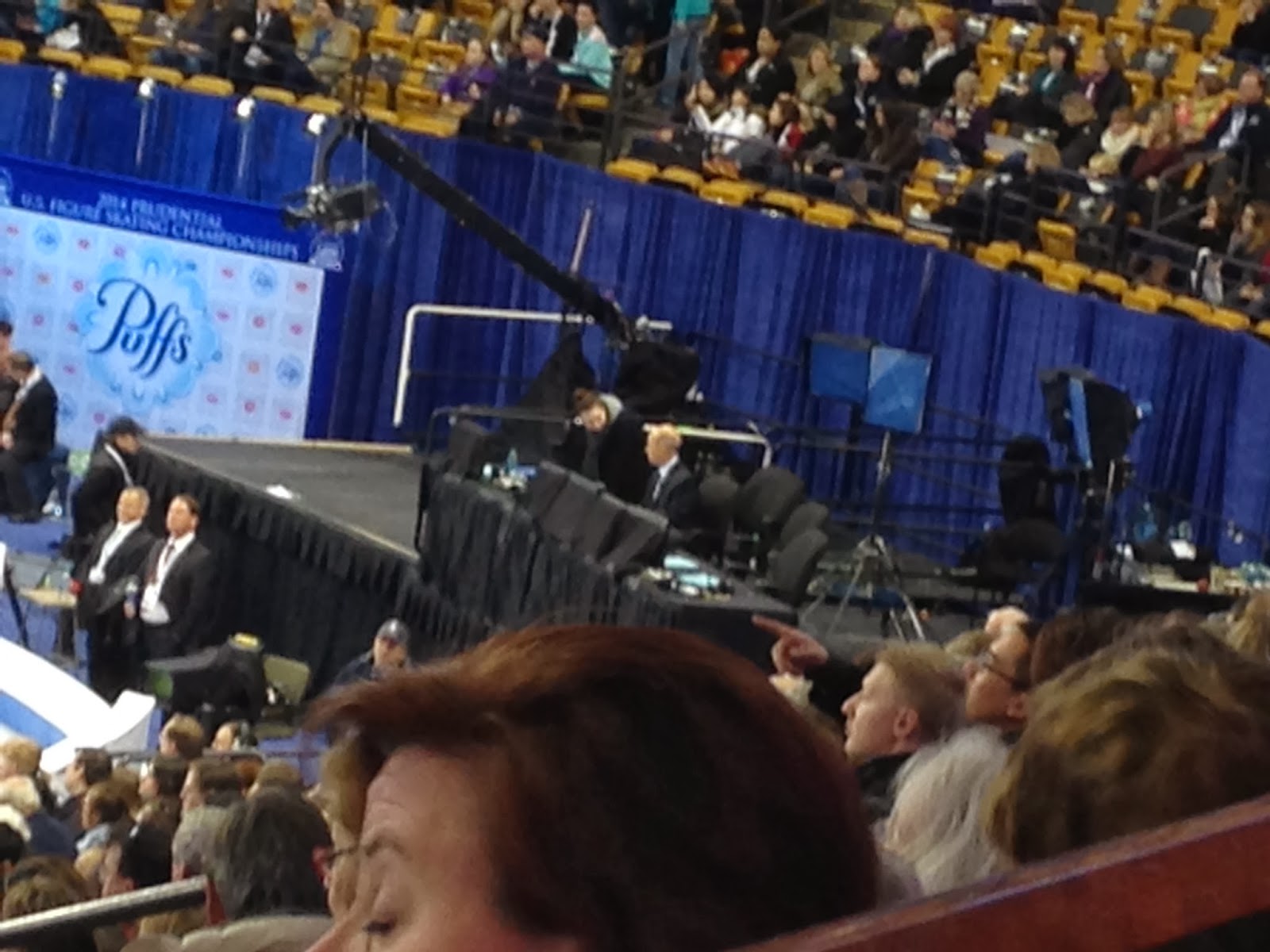 During the event, Paul Wylie was sitting next to a petite woman, who looked familiar. But I just couldn't place her. I had a hunch she was a pairs skater from the past. I keep picturing her with late 80s/early 90s poofy bangs and a schrunchy bun on the top of her head. When I was home later, I did a little research through old US Nationals results, and determined that she was Calla Urbanski, who skated pairs with Rocky Marvel. They were national champions a few times, and also competed at the Olympics in 1992, which explains why she and Paul seemed to be such good buddies.

Needless to say, I was pretty star struck. It was an amazing experience. And after seeing the energy in the audience when Jason Brown was on the ice, I cannot wait to see him competing in the next few days! 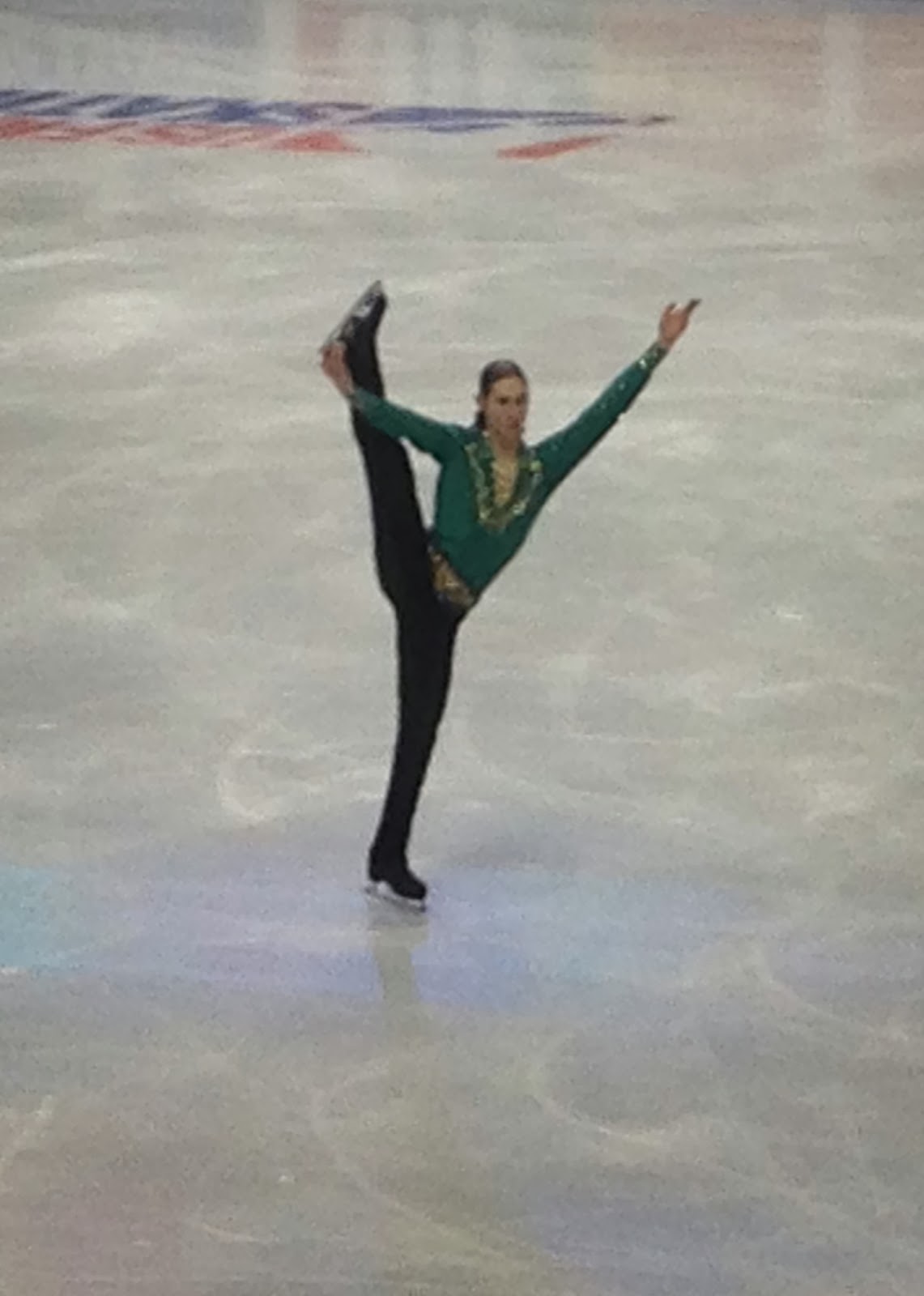 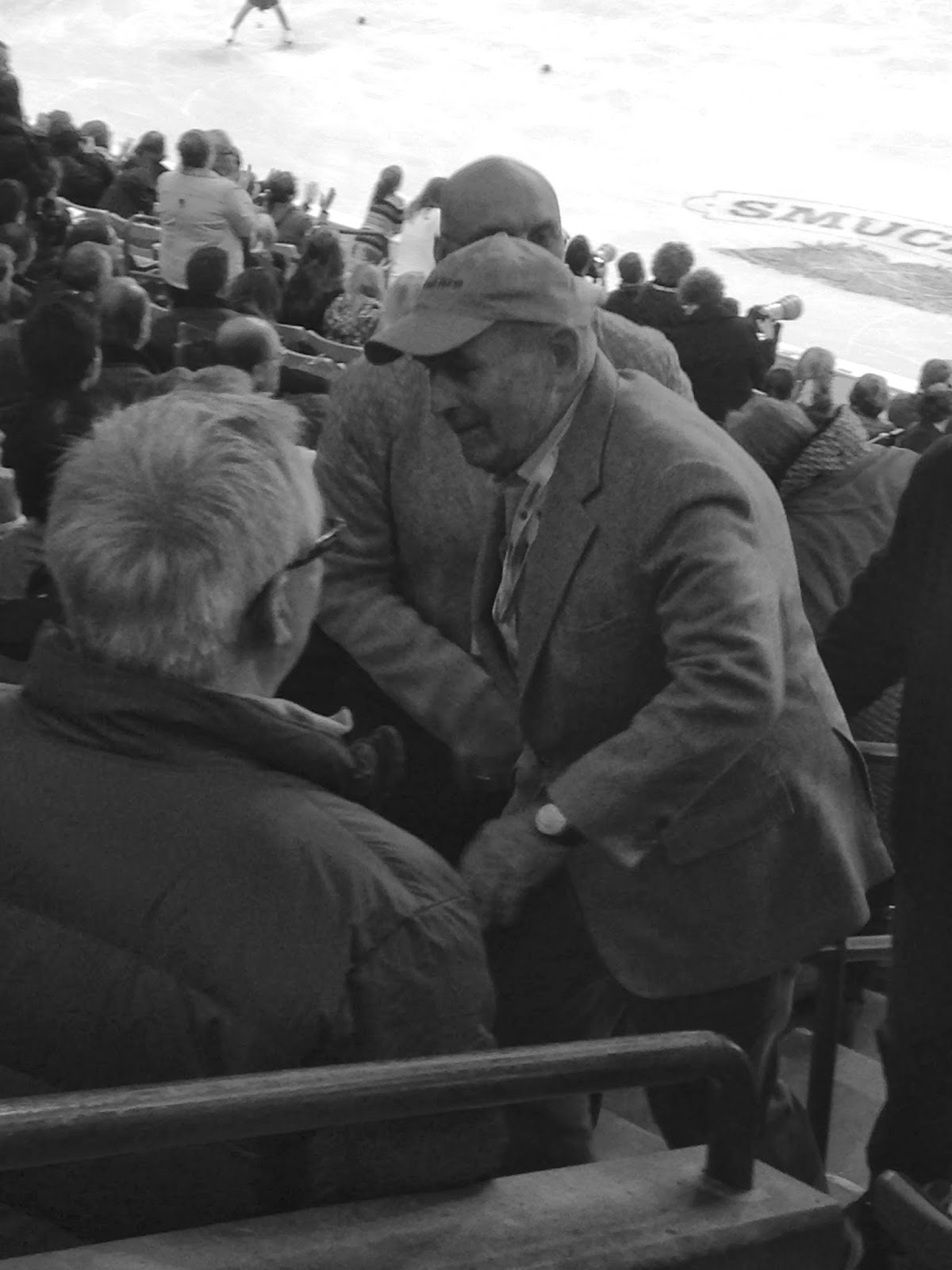 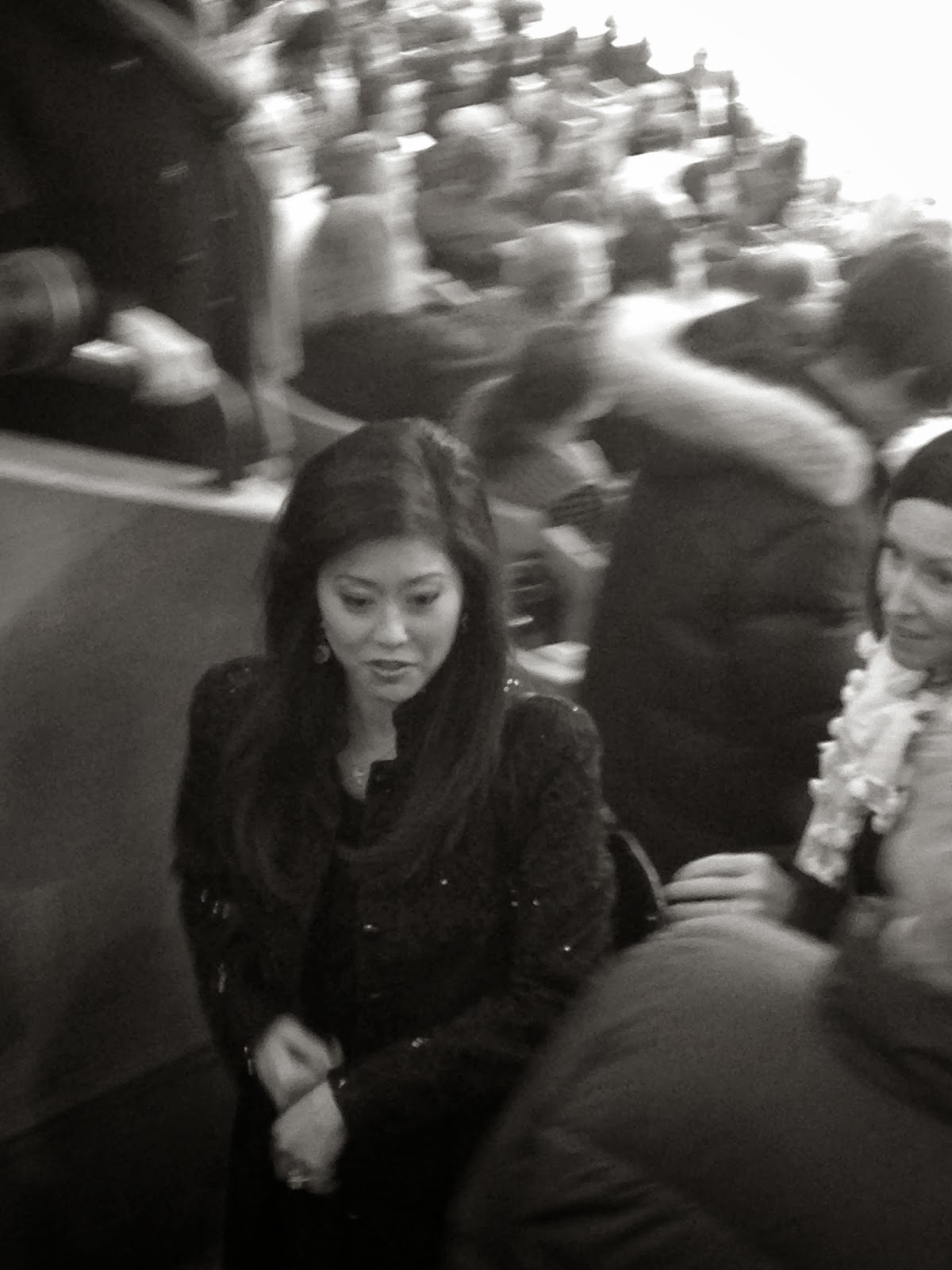 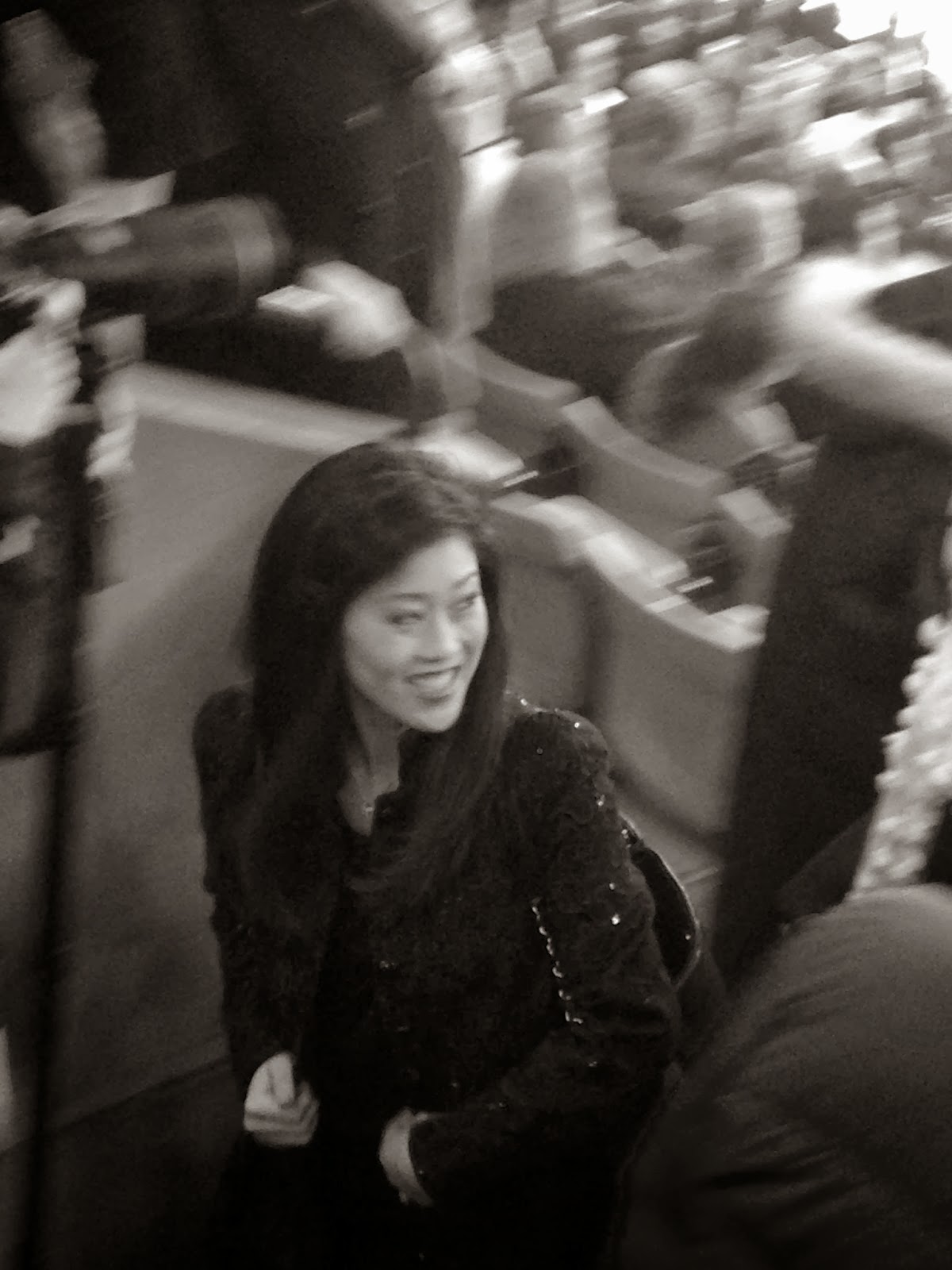 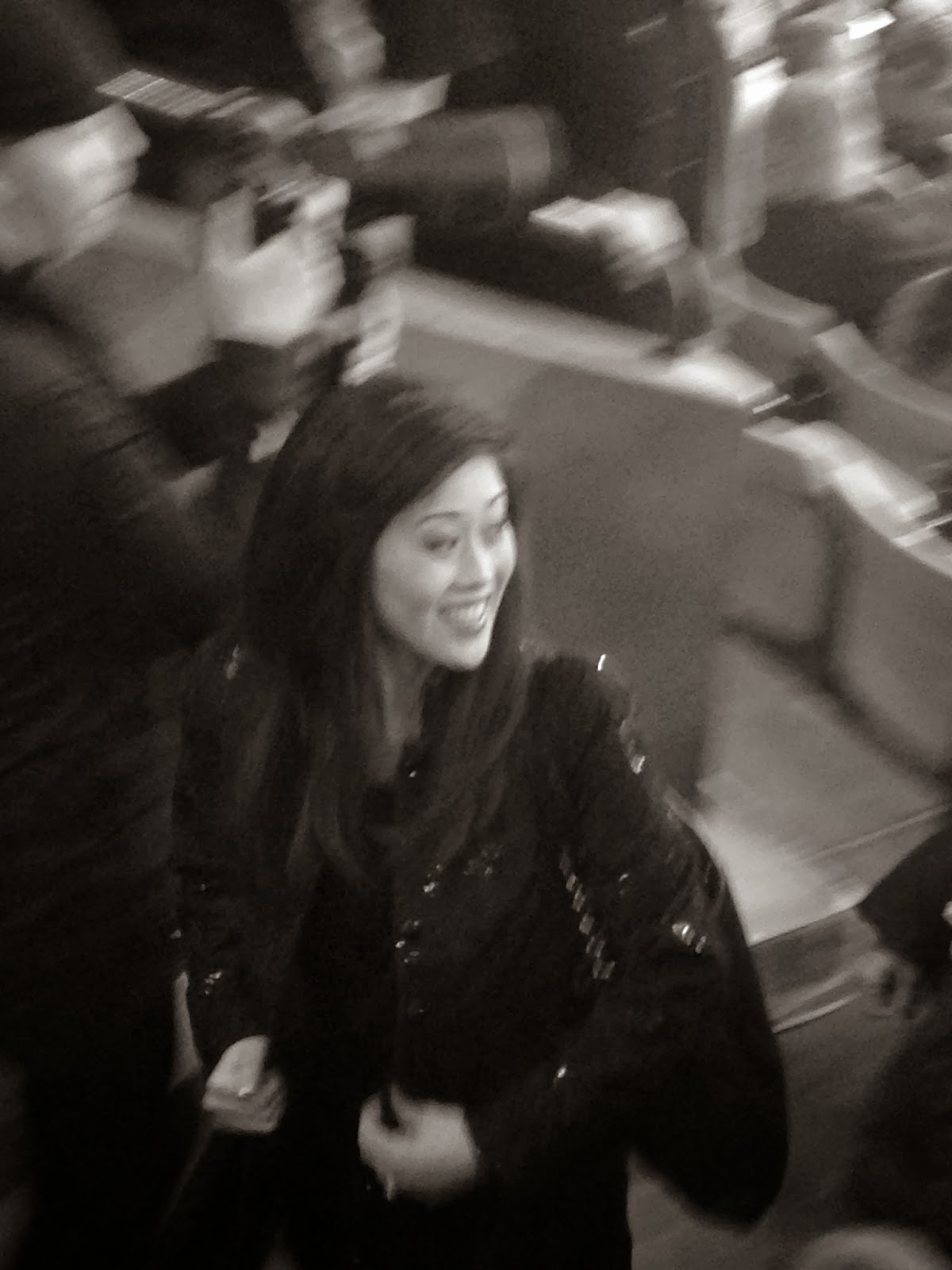