A proper post about our basement renovation is well over due. But, it's still very much a work in progress, with a lot of ceiling, trim and finishing work left to do. We are constantly working on various design features. And someday...maybe we'll be done. Here's one we completed recently. This door goes to the one storage/mechanical closet in the room. The closet takes up one entire wall of the play corner, which minimizes our storage capacity, so we decided to make the door something we can play with.

Magnetic primer and chalkboard paint to the rescue!

We started with a new hollow core door because the original one had a hole cut out where we used to have a cat door. This closet used to house the kitty litter box before Leo was born, but we wanted to keep that mess well away from the play area, so the kitty door wasn't needed anymore after we made the move. It was much easier to start with a new door instead of trying to patch the hole, especially since we wanted a nice surface for chalk.

The magnetic primer was definitely a challenge to use. I missed the recommendation to have the paint stirred at the store, so I spent a loooong time stirring to get the solid blob of iron filings to become something resembling paint.

The instructions said three thin coats would produce the best results, but after reading some reviews online, and finding mixed success, I decided to use the entire can. After the first three coats, I concentrated more on the areas where I thought we would be more likely to use magnets. All in all, it turned out to be about seven coats. Good thing it was just a door! And since it was a new one, we were able to set it up on some saw horses in the garage, so I did the painting flat instead of vertically, which made the process much easier.

After all of those coats of primer, I was relieved that one coat of chalk board paint seemed to do the trick/ Probably because I had such a nice black base coat! The chalk board paint needed to cure for three days before it was ready for writing. So, about a week after I started painting, Greg had the door hung back in place. 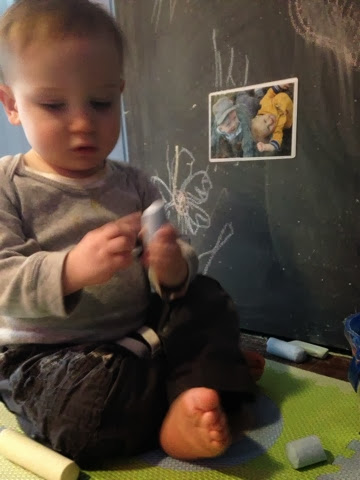 I had to "prime"the chalk board by rubbing it completely with a piece of chalk, and then wiping it off. Apparently, this helps ensure even erasability later on. Then, we were ready to draw!

The magnetic surface isn't the strongest. It will probably be hard to hold up pieces of paper without getting those super strong rare earth magnets, which aren't really recommended to be around children. But, thin business card style magnets work like a charm, as do the magnetic sleeve picture frames I got to display a few family photos. (That's Leo and his cousin G when we visited England last spring.) 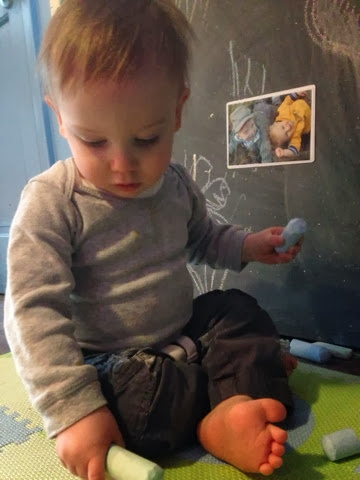 We're already putting our new chalk/magnet board to great use!